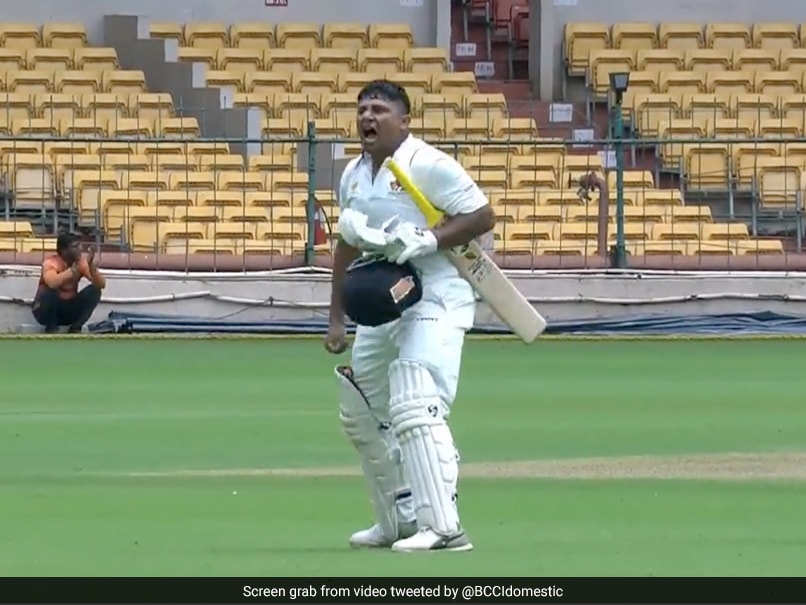 Mumbai batter Sarfaraz Khan was overcome with emotion as he reached his century on Day 2 of the Ranji Trophy ultimate in opposition to Madhya Pradesh. The 24-year-old was pumped up and emotional as he celebrated his century and was seen in tears as he took his helmet off. He capped off his celebration with a Shikhar Dhawan-style thigh-five. It was his fourth century of the season and his eighth First Class century total. The Board of Management for Cricket in India took to Twitter to share a video of the second Sarfaraz reached his century.

“This has been an outstanding knock within the all-important summit conflict,” the BCCI captioned the video.

This has been an outstanding knock within the all-important summit conflict. #Final | #MPvMUM | @MumbaiCricAssoc

Sarfaraz started the day on 40 and reached his half-century off 152 deliveries. With Mumbai dropping wickets on the different finish, he accelerated successfully after reaching his fifty.

He scored his subsequent fifty runs off simply 38 deliveries to assist Mumbai get previous the 300-run mark.

Mumbai captain Prithvi Shaw received the toss and elected to bat. Yashasvi Jaiswal and Shaw had placed on a gap stand of 87 runs, earlier than the skipper was dismissed for 47.

Jaiswal went on to hit 78 whilst wickets fell on the different finish. Mumbai completed Day 1 at 248/5.

Subjects talked about on this article